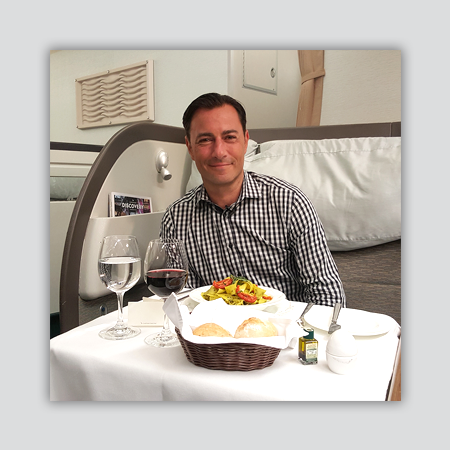 In addition to being an expert in the culinary world, he is a nationally known host/personality on EVINE (formerly ShopHQ) as he has been selling multiple products LIVE for the past 10 years achieving prime time host status and securing multi millions of dollars in sales.

Beginning March 9th, Daniel will sit on the Culinary Investor panel for the 1st season of Food Fortunes on Food Network to decide if he will invest in a new product being presented — produced by 3 Ball Productions.

Daniel is also a judge on Food Network’s Kitchen Inferno. Making appearances on talk shows around the world, planning meals for 2 major international airlines and developing in-room dining for a 5-star hotel chain in Asia has cultivated an international fan base.

Currently, Daniel is based in the US and is a full time presenter for EVINE, one of the top luxury home shopping channels in the US with a media penetration of more than 86 million homes where he quickly accumulated a long list of fans. As the resident Chef, the growing popularity of the kitchenware section led to an inauguration of a culinary program titled Daniel’s Kitchen dedicated to showcasing Daniel’s healthy eating recipes using the kitchenware sold on EVINE. Over the past 10 years, the channel has utilized Daniel’s personality in additional areas selling watches, electronics, home wares, supplements, jewelry and handbags. On air in 3-hour, live slots 4-6 times a week, Daniel has clocked over 11,000 hours of live hosting bringing out guests to showcase themselves and their new products and flying solo as a primetime Host. He is responsible for millions of dollars worth of sales each year. He is the #1 or #2 host depending on the product (translation: a lot of fans.)

For the last 5 years, Daniel has created the in-room dining menus for the 18 properties that make up the 5 star Dusit Thani hotel chain in Asia. He has also designed menus for the Shangri-La, Manderin Oriental, Hilton, Conrad, Sheraton, Westin, Marriott, Carcosa Seri Negari over the last 10 years. 2013 Daniel Launched power breakfasts at VIE hotel in Bangkok.

Daniel also fronts webisodes for United Health Care for nutritious, easy-to-make videos that have a total of 28 on-line videos.

For the past 3 years, Daniel has been planning all of KLM’s on-board meals totaling 2 million meals per year. And Daniel just accepted BMI International Airline’s offer to create their on-board meals.

His simple, healthy eating recipes have been featured in numerous magazine features in the UK, US and across Asia. In the UK, Daniel co-hosted a successful TV series for Discovery Health called Weight Matters with Vanessa Feltz. He filmed a series of travel documentary reports from Dubai, Thailand and around the world for Good Food Live on BBC’s UK Food. He makes regular appearances on BBC’s Saturday Kitchen, has hosted over 100 episodes of Kitchen Takeover Chef and hosted Weekend Kitchen in the US and was the lead presenter and on-air Chef for QVC UK, one of the top five TV shopping channels in the World.

Daniel created his own range of healthy gourmet foods, ingredients and smart cooking tools. His products which include gluten free jams, spices and olive oil have launched in premium lifestyle stores in Asia, Australia and the U.S. under Daniel’s personal brand, The Model Cook™.

HAVE YOU GOT A PROJECT THAT YOU WOULD LIKE DANIEL TO BE INVOLVED IN?

You can email Daniel: info@televisioncookery.com to arrange a meeting to discuss your ideas and find out how he can help with your project. He looks forward to hearing from you.